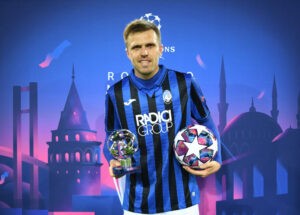 VALENCIA, SPAIN – MARCH 10: (FREE FOR EDITORIAL USE) In this handout image provided by UEFA, Josip Ilicic of Atalanta recieves the man of the match award and also the match ball after he scores all 4 goals of the match for his team during the UEFA Champions League round of 16 second leg match between Valencia CF and Atalanta at Estadio Mestalla on March 10, 2020 in Valencia, Spain. (Photo by UEFA – Handout via Getty Images)